An $85,000,000 burden strapped onto the backs of Penn State Students.  To satisfy the ego of an amateur artist, who happens to be the Penn State University Presidente. 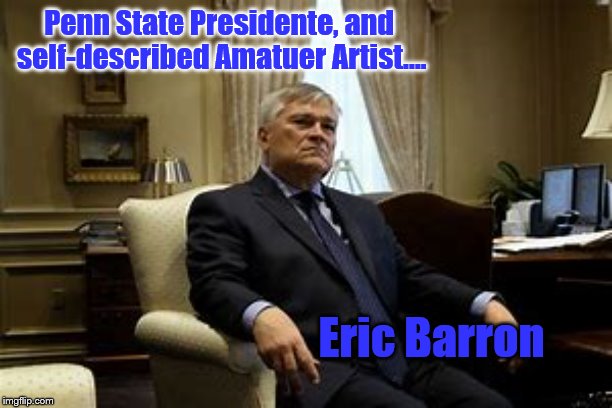 Brief recap of some key points, for those who are unfamiliar with Penn State’s Existing Art Museum:

1) Penn State’s existing Art Museum is the Palmer Museum of Art.
It is located on Curtin Road, one block south of Park Avenue.
Most of it was constructed in the mid-1990s.

2) Although it is “Free for All” (charges no admission), the Palmer hosts only about 100 visitors per day.
If you look at the PSU map, you will see two parking lots within 100 yards of the Museum, either of which could easily suffice and handle 10 times that many visitors per day (so, “additional parking” is not a current issue).

3) Art Museums – all of them, including the Palmer – rotate through various exhibits “on the floor” – while storing other works and types of art until they are rotated up to the floor exhibits.
This keeps the exhibits fresh, and provides a reason for patrons to make repeated visits.  Even the proposed “new” museum would place about 6% of the total collection on the floor at one time – which is not unusual (so, the need to “display all the collection” is not a current issue)

4) Eric Barron fancies himself as an accomplished amateur artist, and has been unabashed in his personal desires to oversee a more notable collection of art.

5) Creating a new Art Museum in front of the Penn State Arboretum locates the Museum – along with the Arboretum – in the “front yard” of Barron’s home, the President’s Mansion.

6) Barron makes multiple references to “raising the level of scholarship”… but at no point does he tell us just what he means by that, nor how replacing the on-campus Palmer Museum with a new $85,000,000 off-campus Barron Museum would accomplish that goal – whatever that goal is.

The only thing we DO KNOW is that PSU Students will be strapped with paying off another (at least) $67,000,000 of debt….

“Yeah, ok, so… The first functionality, we have a fine Art Museum.

It is in – uh – central campus – uh – little parking – uh – little opportunity for changing its – uh – its size and scope, uh – and at the same time a significant number of individuals that are interested in donating their art.

And we see ourselves in a position to, to actually become a premier location for American – uh – art.
And have this be a part of the scholarship and reputation of the University.

So this is one part of it where what we have is inadequate, inadequate to get to.  No school buses come by because central campus no place to park.  Uh – and so the location is not ideal, plus the fact, uh – that we have the potential to do this.

In addition to that we have – uh – a couple of dozen small museums on campus for which you could say the same thing.  And for which we are not accredited as a museum because we have a whole bunch of small museums.

We’d like to give ourselves to a position where we move all these things off of central campus, and we get it to a place where it is accessible, and we can advance the level of scholarship so this is an overall objective you might say for the university coming under the Arts and Architecture strategic planning.

So – uh – this is also – um – somewhat challenging because we don’t look at this as part of outreach as something for which – uh – we want to charge students.  Uh – and, and so we look for alternative sources for funds.”

– $4 Mill from Penn State Athletics (as outlined below in Barron’s presentation).

$14 Mill targeted as coming from philanthropic donations that they HOPE to raise for the project.

$67 Mill of debt, the cost of which will ultimately be placed on the backs of current and future students

“The opportunity was presented by the fact that the – uh – renegotiations of the BigTen media contracts  [This contract refers to the money paid to the BigTen by various TV Networks, primarily to broadcast BigTen football games] resulted in a substantial growth – uh – in terms of the revenue and value of that particular contract.”

Of course, the idea that PSU Athletics HAS ANY EXCESS funds available – or even enough to come close to meeting the funding needs of their own projects – is laughable…. as we discussed in this earlier Blog:

Barron’s nonsense is simply a blatant shell game to try to fool the uneducated into thinking there is some “free” money out there – as if these projects don’t effect the University’s financial picture.

“And because of the large growth in – uh – the large growth in  – in – uh – um – salaries and in athletics and prominence – uh – a group of the BigTen presidents sat down uh – three other presidents other than myself, and made the decision that we would use a portion of the BigTen media contract funds to do things on campus that were non-athletic.

“We” didn’t make any decision.

Barron is responsible for Penn State.

Whether or not 3 of the 13 other BigTen presidents also decided to take funds from the Athletics media contract (or that 10 of the other 13 did not follow suit), for whatever purpose, is irrelevant to Penn State.

For $2 million dollars in annual compensation, PSU certainly didn’t get a “Harry Truman” for President.

For some reason, Eric Barron can’t remember who those other three BigTen Presidents – his closest colleagues – were.

Barron asked about his BigTen Colleagues:

“Perhaps supporting athletics in some ways, but not athletic to do things on our campuses that were difficult to achieve otherwise.

And we made the decision that that contract was something that essentially was bondable.  And allows us to do, to do things.

So I mentioned this to the Board other times.  bragging about what we, what we, were doing at each one the BigTen Universities that participated.  That $4 million dollars would be set aside to do things that enhanced our university.”

“Difficult finding these resources so , so – uh – give you an idea, I used that money to commit to match the undergraduate fee for mental health as one of the elements  [Last year, Barron took approximately $1 Mill from the PSU Athletics revenues to increase funding for CAPS – Counseling and Psychological Services] – uh – second element that I looked to support was the growing cost to support the Blue Band.”

“One of the things that I did was to commission a study on what it would be like to place this museum off campus that and – uh – that study placed the museum on the edge of the Arboretum.

Now the arboretum and Arts and the Museum complex becomes a destination which, which – uh – the consultant said could easily bring upwards of – over 400,000 visitors to our region [The Philadelphia Museum of Art – one of the most visited art museums in the world, in a city of nearly 2 Million people – draws just under 800,000 visitors].  And school buses would be able to drive up there.

This “study”, and the “consultant” who informed Barron that 400,000 visitors would be drawn to his Museum (13 times as many as the number who visit the Palmer Museum)… who was that “consultant”?

No one seems to know.

Least of all, President Barron.

The only thing we DO KNOW is that PSU Students will be strapped with paying off another (at least) $67,000,000 of debt…. to satisfy the ego of Eric “The Amateur Artist” Barron.