Did you miss the last Penn State Board of Trustees “Public” Meeting?

Well, if so, here is a transcript (in its entirety):

Mark Dambly (after calling the meeting to order):

“We have a slate of 13 Consent Agenda Items to come before the Board for approval.

If anyone thinks that one or more items should be discussed and voted on separately, please say so and we will exclude that item or items from the consent agenda.


Are there any such items?” — After a 3 second pause of silence (was anyone even awake?) —

“If none, I have a motion to approve the Consent Agenda Items A through M as presented.

Forty seconds of nothing.

They are no longer even pretending.

And no one – NO ONE – so much as cleared their throat.

I am not confident that all of the members of the Board even know what they “acted on”.

In fact, I would wager that some of them couldn’t even tell you what they “acted on”.

(You can view the “public meeting” in the video linked below.
It starts at the 30 minute mark of the video.)

Now, lets take  look at why there are supposed to be public meetings:

The 13 “Consent Agenda Items” that Dambly referred to in his oration, are items that the Trustees of the University are obligated – by Law, by Charter, and by Common Sense – to discuss, deliberate, evaluate, and vote on.

So that we all know what our University is doing, why they are doing it, and who is advocating for or opposing those actions.

These are the significant items of fiduciary responsibility that are the only reasons we even HAVE a Governance Board (the Board of Trustees).

What should have transpired – at a minimum – if we had even ONE responsible steward from among the 38 member Board?

At a minimum, those folks who constantly tell us they are fighting for Responsible Stewardship

could have brought these 13 items of governance into discussion.

No one was stopping them.

In fact, not only was no one stopping them, but they –
all 38 of them – have an Obligation and a Duty to have those discussions.

They – or any one of them – could have simply said “Yes” when asked if there was any reason to discuss these 13 Consent Agenda Items.

But they did not.

And this is par for the course on EVERY item of governance coming before the Board.

As just one example:

In that 40 Second Meeting, one of the things that was “approved” was the expenditure of $60,000,000 + to RENOVATE two East Halls Dormitories.

Not one single word was spoken from ANY of the Trustees – no one watching would have even known they approved such an expenditure.

At the very LEAST, those Trustees should have:

1 – Outlined the parameters of the proposal and discussed the nature of the work being considered.
Discussed what missions of the University might be accomplished by undertaking the project.

Over the 25 year life of the renovations, the costs to finance that project will add a burden of $5,000 PER YEAR each year, per Student housed in those dorms,  for the next 25 years.

Of course you didn’t, because NOT ONE member of that 38 Trustee Board told you.

2 – Discussed what alternatives, if any, were evaluated that might have accomplished the missions of the University in a more effective manner.

That the cost to complete all the major maintenance projects on those dormitories – to bring everything up to date and efficient – was not $60,000,000, but was $15,000,000 (according to PSU’s own project estimates).

And that the other $45,000,000 was discretionary and cosmetic spending.

Of course you didn’t, because NOT ONE member of that 38 Trustee Board told you.

DO YOU EVEN KNOW:

What your representatives on the Board think about that project?

Of course you don’t, because NOT ONE member of that 38 Trustee Board told you.

Why do these people
– especially the nine folks that ask us to vote for them –
tell us that they are being muzzled and prevented
from doing their job as responsible fiduciaries?

Why do they make such claims, when the record makes it abundantly obvious that when given the opportunity, they abdicate all of those responsibilities of governance?

These Trustees – all 38 of them – are not failing to do their duty because someone is standing in their way.
They are abdicating even the most fundamental functions of governance.

And there are only so many options as to WHY they are abdicating their responsibility to you:

2 – They prefer the benefits reaped by “going with the flow”, and are not committed to placing service to the University and its stakeholders first and foremost.

3 – They are not sufficiently committed.  Committed enough to dedicate the time and resources to “do their homework” – to analyze and understand the issues facing the University – and take appropriate actions.

4 – They are not possessive of the skills necessary to fulfill the duties of a Fiduciary.

I do not know what the reasons may be for each Trustee.

I am not sure exactly WHY each chooses to neglect their duties as a fiduciary.

But, again, there are only so many options.

And, most certainly, one of those options is NOT that they are prevented – by some outside force – from performing even the most fundamental tasks of their position.

How short is our memory?

How active is our disregard?

Do we not remember the previous disasters rained down on the University by a disengaged, secretive, and deceptive Board of Trustees?

Have we forgotten what happens to the sheep?

When in the presence of the Wolf? 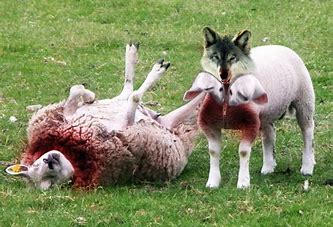 “Deliberate and take official action on agency business in an open and public meeting. It requires that meetings have prior notice, and that the public can attend, participate, and comment before an agency takes that official action.“

A link to the statute is provided here:
https://www.legis.state.pa.us/cfdocs/legis/LI/consCheck.cfm?txtType=HTM&ttl=65&div=0&chpt=7

Link to the video of the February 22nd “Board of Trustees Public Meeting”:

For those who don’t want to watch the entire video,
what actually transpired during the 57 minute get-together was this:

View all posts by barryfenchak4trustee