This week, among the many topics for discussion, the Penn State Board will announce the appointments to the two open seats on the Board’s exclusive, 13 member “Executive Committee”……
One of the leading governance dysfunctions of Penn State’s Board of Trustees.

Like a group of pimpled, pubescent junior high students, the Trustees will preen, posture and pout, as they plead their cases for inclusion on the Executive Committee – like kids trying to jockey for a seat at the “Adult Table” for Thanksgiving Dinner.
In the past, votes on critical issues have been bought and sold – all in exchange for a comfy leather seat at the Executive Committee table.

(FWIW, The two open seats will likely go to Trustees Barbara Doran and Bill Oldsey…. Two Trustees who the power brokers of the Board – Mark Dambly and Ira Lubert – find to be easily sated, and impotent wrt interrupting their plans.)

But that’s not the real story here – or of any significant importance.   As we shall see.

Read on to the end of the BLOG for the “real story”.

Amid all of this posturing and preening you will likely not see a single Trustee pose the most basic and pre-emptive question:

“Why does the PSU Board HAVE
an Executive Committee?”

And “How is it being using to usurp responsible governance?”

[Something that we have talked about at length…. including here:

1) Why DOES the PSU Board have an Executive Committee?

According to the Penn State Charter – composed in an era when a ROLODEX would have been considered cutting-edge technology – the Executive Committee was created, in 1905,  in order to “transact necessary business”…. business that may arise between regularly scheduled meetings of the Board, and of sufficient urgency that it might be logistically difficult to gather a quorum of the entire Board. 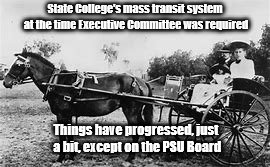 Thus allowing a small group to get together – without requiring the presence of a larger quorum – to transact business in a timely fashion.

Does the Executive Committee get together in an ad-hoc fashion to “address timely business issues of the University”, when it would be logistically difficult to convene the full Board?

And thus, the Executive Committee lives on…. because it allows a small, exclusionary group to get together behind closed doors – without requiring the presence of a larger quorum – to secretly set the course of the USS Nittany Lion.

2) What DOES the Executive Committee do?

Largely, it serves to:

3) How is the membership of the Executive Committee constructed?

“Members of the standing committees, and the chairperson and vice chairperson thereof, shall be appointed by the Chair of the Board of Trustees.”

Mark Dambly – who was never elected to the Board by any group of Penn State stakeholders – has complete control over ALL committee appointments….

Including the Committee which now has complete, unaccountable, and “behind closed doors” control of the University……

Because (and this is the importance of today’s actions):

Dambly’s latest act as Chairman of the Board is to, beginning this month:

Dismantle the work of most of the various sub-committees, and increase the power of his recently created de-facto “Executive Committee”….. a group composed solely of Dambly and his Dambly-appointed gang of Committee Chairmen. 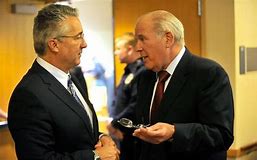 Mark Dambly – without opposition – and with nothing but his unchecked megalomania as rationale, has ordered that the responsibilities of most of the members of the Board, will be replaced by Dambly and his gang of “ Committee Chairmen”

If this were Soviet Russia – or Idi Amin’s Uganda, or Pol Pot’s Cambodia, or Hussein’s Iraq – this type of unaccountable power grab might be considered standard operating procedure.

At our Alma Mater?

Will we stand by as this corrupt Child-Despot “spit in the eye” of responsible governance?

It appears that we may.